Welcome to our online exhibition

As a highly sensitive topic, sexuality awakens strong emotions. Previous attitudes survive for a long time even after the law has changed. Those in favour of decriminalisation referred to science and human experience, uniqueness, and privacy. Those opposing decriminalisation considered homosexuality a crooked, morally repugnant and alarming phenomenon.

The Police Museum decided to contact the Degree Programme in Cultural Production and Landscape Studies at the University of Turku, requesting its students to write a course project about how changes in legislation have influenced police work. This resulted in an advanced-level degree project, based on which the following online exhibition has been created for you.

The exhibition contains information on the history of the criminalisation of homosexual acts, the various changes in legislation over time, and crimes that sexual minorities have been subjected to. Other topics explored include how police education and work has changed in regard to sexual minorities and how the police have collaborated with associations that promote equality for sexual and gender minorities.

The duty of the police is to uphold the rule of law, national security, public order and safety; to prevent, detect and investigate crimes; and to forward them to the prosecutor. The police must honour civil and human rights and use an appropriate amount of force when guaranteeing these rights. (Police Act 872/2011.)

The Ministry of the Interior, under which the police organisation operates, has the goal to strengthen true equality and combat discrimination in an active, systematic and persistent manner. The Ministry’s equality and anti-discrimination programmewas adopted in 2016. The programmeis designed to prevent and intervene against discrimination based on sex, ethnicity, age, language, religion, belief, disability, sexual orientation or multiple factors. According to Finnish law, it is illegal to discriminate against a person on the basis of sexual orientation.

We wish you many interesting moments! 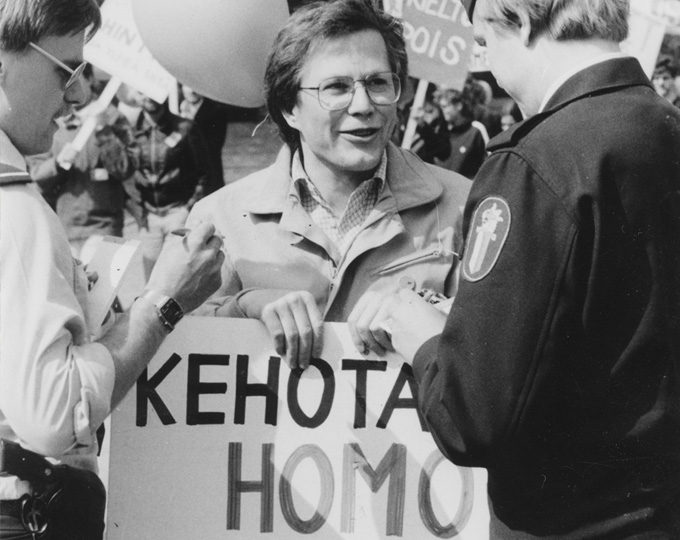 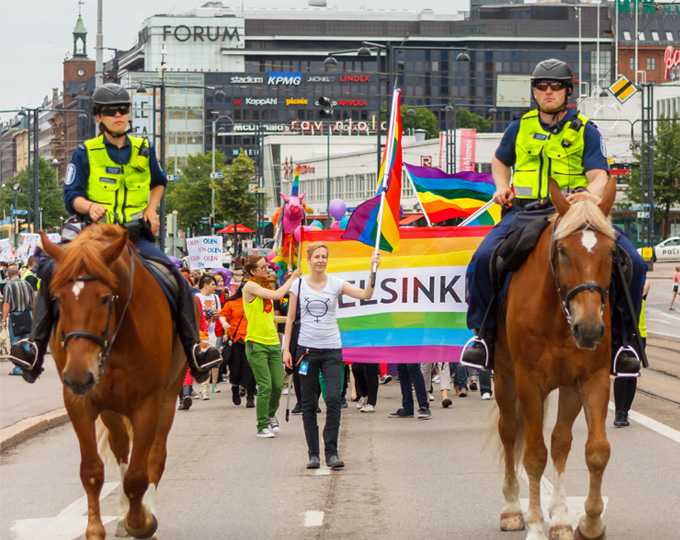 The roots of criminalisation

The criminalisation of homosexuality began during the Middle Ages, when Finland was part of the Kingdom of Sweden. In the late 13th century, the Catholic Church decided that acts of homosexuality were to be punished.

Equality for sexual and gender minorities was originally promoted mainly by associations and organisations including the Second Beam Group, the Psyke Discussion Forum and Seta, which were formed in the 1960s and 1970s.

The effects of
legislative changes

During the period 1894–1971, the Criminal Code of Finland (chapter 20, section 12, subsection 1) forbade sexual acts between members of the same sex. Although penalties were required by law, few offenders were convicted during the early decades of the ban.

News reports
on violence
and other crimes

Sexual minorities and the police

During the period 1894–1971, the Criminal Code of Finland prohibited homosexual acts. The police did not actively monitor homosexuals and only seldom received information on homosexual relations taking place.

Sexual and gender
minorities
in the police force

The police collaborate with Seta, an association promoting the human rights and equal treatment of sexual and gender minorities.

Read more here
Seta, an association
for promoting
the rights of
sexual and
gender minorities

Asylum seekers and
the authorities

The significance
of the legislation
on transsexualism

Based on a request by the Police Museum, the online exhibition was created as a course project of the Degree Programme in Cultural Production and Landscape Studies offered by the University of Turku.