Legislative changes concerning sexual and gender minorities began to be debated in the 1960s. In 1966, Member of Parliament Jouni Apajalahti of the National Coalition Party proposed changing Chapter 20 of the Criminal Code to remove the prohibition of homosexual acts. Apajalahti argued that the ban prevented homosexuals from attaining equality with heterosexuals by upholding a judgmental attitude towards homosexuals and creating feelings of guilt among them. During the ensuing political debate, many other perspectives on the issue of decriminalisation emerged. Some members of parliament held the view that decriminalising homosexual acts did not mean condoning them, but rather making it easier for those suffering from the illness of homosexuality to seek help and treatment.

Listen to Jorma Hentilä’s account of the legislative changes. 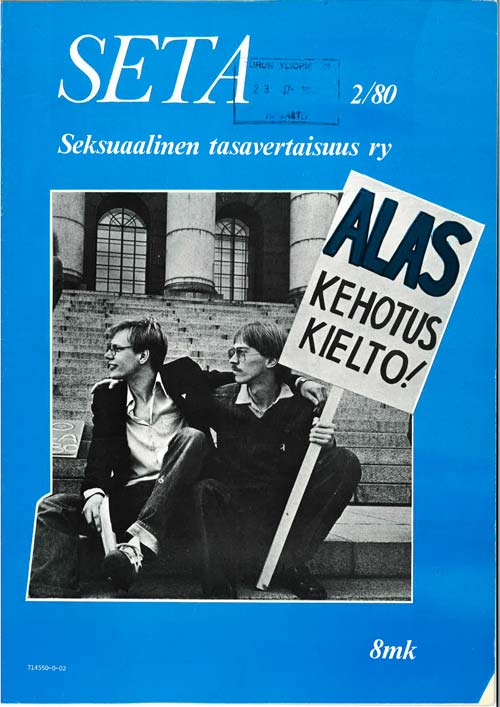 Protesters in front of the Parliament Building opposing the ban on encouraging homosexual acts. Big signs were used to display the statements of the protesters to the public.

Many considered the ban on encouraging homosexual acts inconsistent since it prohibited public encouragement of acts that were no longer illegal. The ban received criticism, the most publicised of which took place during Seta’s Liberation Day protests. Protesters carried signs encouraging homosexual acts, thereby openly challenging the ban on doing so. The police did not actively intervene against this kind of public provocations against the ban.

During the Liberation Day protests of 1981, the police confiscated protesters’ signs with words encouraging homosexual acts. In response, the protesters made a collective confession of guilt regarding their call to homosexuality. The prosecutor, however, concluded that the protesters had acted on a whim and would consequently not be prosecuted. Similarly, a petition calling for violations against the ban was signed by protesters on the Liberation Day of 1984 and submitted to the police. This resulted in no consequences for the protesters, who next posted the petition in the window of Seta’s headquarters to enable passers-by to read it.

Listen to Jorma Hentilä’s account of the significance of the Liberation Day protests. 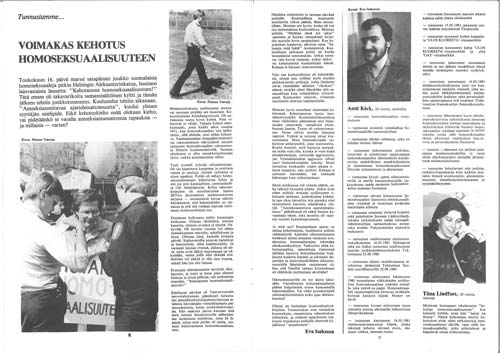 The article “A strong call to homosexuality” in a 1981 issue of Seta Magazine. The article contains confessions of people who had participated in the protests and excerpts from police interrogation protocols.

Click the image to read the article (in Finnish only).

When the Criminal Code was changed in regard to homosexuality in 1971, the age of consent for heterosexual acts was set at 16 years and that for homosexual acts at 18. The law was thereby still discriminatory in regardto sexual orientation.

The age of consent is the lowest age at which a person may choose to engage in sexual activities. Sexual relations with a person below this age are thus illegal.

According to the so-called seduction theory, which prevailed for a long time, young boys in particular matured late and were very impressionable. This being the case, homosexuality could “infest” these boys if they were sexually harassed by adults. The decision to set the age of consent higher for homosexual acts than for heterosexual ones may have been motivated by the prospect of harassed adolescents turning into homosexuals, more so than by a concern about the harassment as such.

Higher age of consent for homosexual acts and the ban on encouraging such actswere present in the Criminal Code until 1999, when the age of consent was set at 16 years for all sexual acts regardless of sexual orientation. During the preceding debates on how the law should be changed, some promoted lowering the age of consent to 15 years. According to unofficial sources, legislators did not wish to lower it below 16 years since they wanted to protect boys, who were considered to mature later mentally.

Listen to Jussi Nissinen’s account of the age of consent.

The effects of legislative changes

Although homosexual acts were no longer illegal, higher age of consent for homosexuals and the ban on encouraging homosexual acts meant that homosexuals had not attained equality with heterosexuals. The public atmosphere and unfavourable attitudes held by many, including police officers, contributed to a feeling on inequality. This led to many crimes against homosexuals not being reported to the police. Reasons for not reporting crimes included the fear of becoming a victim, being revealed as a homosexual or not being taken seriously by the police.

Listen to a contemporary’s account of covering up homosexuality.

The debate on changing the law was in itself traumatising for many. The opinions and arguments that surfaced in the parliamentary debates were often emotionally charged and denigrating. Social psychologist Jussi Nissinen commented how ”grown-ups in parliament, ostensibly representing the people, spoke in a repulsive and belittling manner. Many remarks constituted outright hate speech and could open painful wounds among the minorities.”

Listen to Jussi Nissinen’s account of the significance of parliamentary debates.

Listen to a contemporary’s account of public declarations of homosexuality.

Programme of Seta’s Liberation Day of 1986. The topic of that year was “The right to one’s own life”.

Click the image to read the article (in Finnish only). 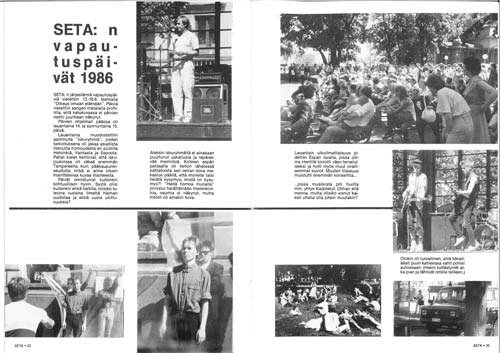